There is much to be said for a shiny, new guitar. Cracking open a guitar case and seeing a gleaming, squeaky-clean instrument is the epitome for a lot of guitar players. Depending upon the guitar, it’s an announcement of status for a guitar player to have the Latest and Greatest (and probably most expensive) guitar come out of that case.

I’ve always gone the opposite way – a friend used to always say ‘A guitar sounds better with a couple of layers of dust on it,’ and I always agreed. I’m not that guy who wipes down his guitar before it goes back into the case. If a few drops of beer land on one of my guitars during a gig, so be it. I might wipe it off the next time it comes out of the case, but I might not even notice it. I’m just not that precious about my guitars. I view them as tools to get a job done, and who in their right mind takes a moist towelette to his hammer before it goes back into the tool box?

A fairly recent development in the guitar world is the introduction of the ‘relic’ – a new guitar that is made to look like it’s been played for years before it even leaves the factory, often for quite a bit of money (Gibson will sell you a $3500 Les Paul and give you the option of spending another $2500 to have it chipped and faded and banged up enough to make it look like it’s not a brand new guitar). What a way to make a living, eh?

So…what’s my point, you ask? Well, I picked up a guitar over the weekend that illustrates the beauty of a well-worn guitar (almost to an extreme), and how real-life wear and tear is preferable to having someone break your guitar in before it even leaves the factory.

Every guitarist has a guitar that is the Object of their Desire. My early love for Hendrix brought me to the Fender Stratocaster, and later on I gravitated to Gibson Les Pauls (with more off-brands, ‘student’ models, and home-brewed hack jobs in between than I can remember). The past few years have seen me go more towards Fender Telecasters and Gibson Les Paul Specials and Juniors, outfitted with Gibson’s original pickup, the P-90. The P-90 is a fine-sounding pickup, but due to it being a single-coil pickup it is notoriously noisy – which is what prompted them to develop the dual-coil ‘Humbucking’ pickup. Those of us who embrace the single-coil sound have learned to work around the hum and even use it for an extra sonic blast when needed.

Through all of this, my secret hope was that I’d someday land a Sixties-era SG Junior. That guitar was economy personified – one P-90, a volume and tone control, and that’s it. The guitar is an absolute rock machine, but as with all vintage guitars the prices have gone through the roof – for a mid-Sixties SG Junior in good-to-excellent condition, you’re looking at a price tag of between $2500 and $4000. Since I never spend that much on any guitar, my dream guitar was out of the question.

I was anticipating the upcoming three-day weekend and was bored of work, so I went on to Craig’s List and went searching for instruments for trade. I like to call it ‘window shopping’ – chances are usually good that I find nothing of interest, but it’s fun to look anyway. But there was a listing from out in Brooklyn for a ’65 or ’66 SG Junior, and the guy wasn’t looking to sell it – he wanted to trade it for an American Stratocaster. There was one catch – it had been in a fire. 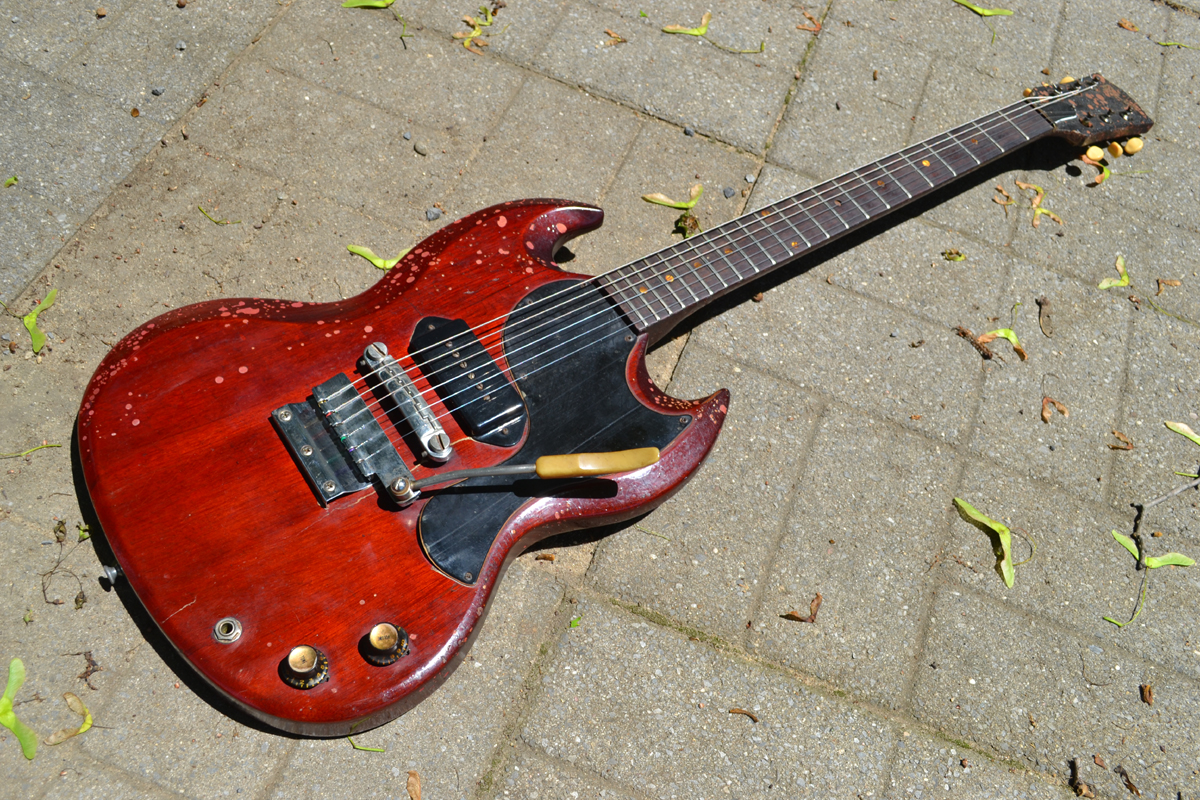 There are plenty of things that can happen to guitars – broken necks, dead pickups, broken truss rods – but fire is especially tricky, because wood that has burned is weakened wood. But the seller (trader?) assured me that no wood had burned, but the guitar had been in such close proximity to the fire that the nitrocellulose lacquer on the guitar had heated up and blistered. He even said the all-original electronics had survived. That was good enough for me, so I offered my 2001 Fender American Series Stratocaster in trade. That Strat was a nice guitar, but to get you gotta give. And we’re talking a damn Grail here. So on Monday, the wife and I hopped in the truck and headed off to Flatbush, Strat in tow.

When I got to the guy’s house and opened the case, I saw a guitar that had plenty of normal age wear – slight cracking of the nitro, which happens when the lacquer is exposed to rapidly shifting temperatures, oxidized hardware, discolored plastic. And on top of that, there were sections of the body and neck where the lacquer had blistered and bubbled.

It was beautiful. We did the trade and I headed home. 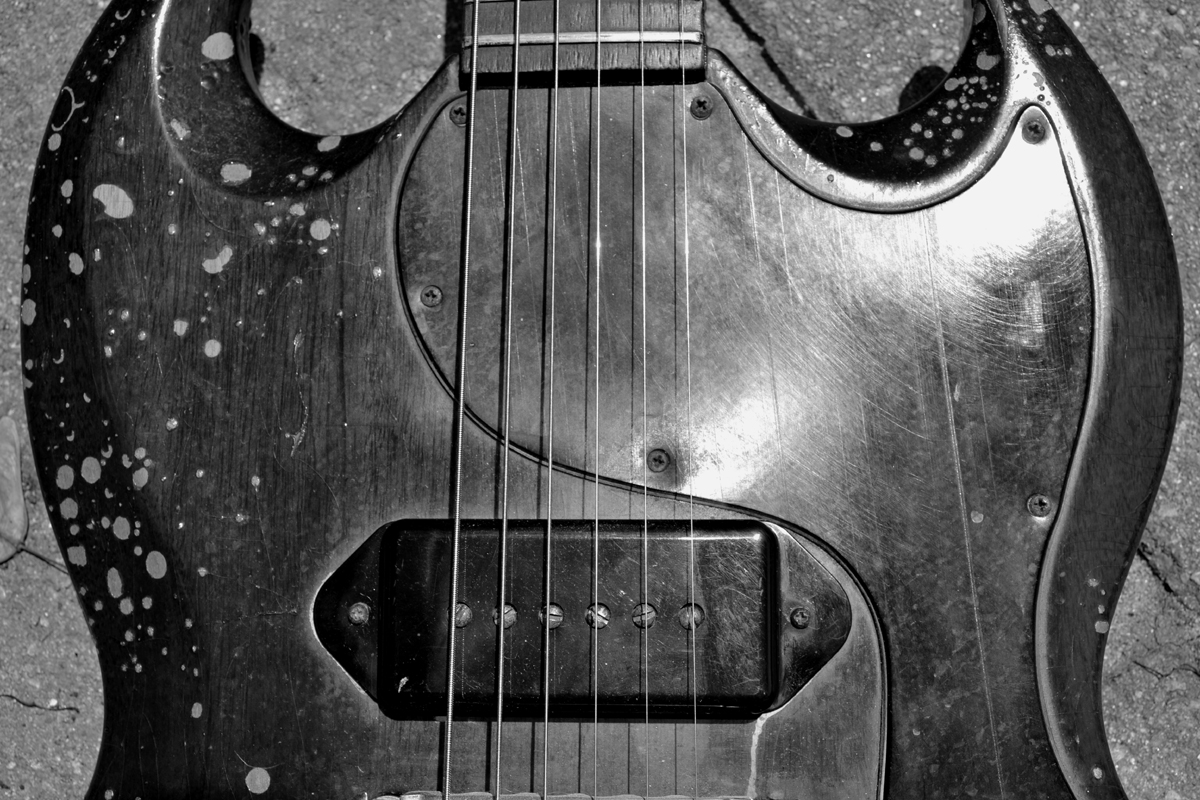 Once I got it home I inspected it more closely. The guy was right – there was no structural damage to the wood at all, and the pickup worked and sounded amazing. But that paint job… 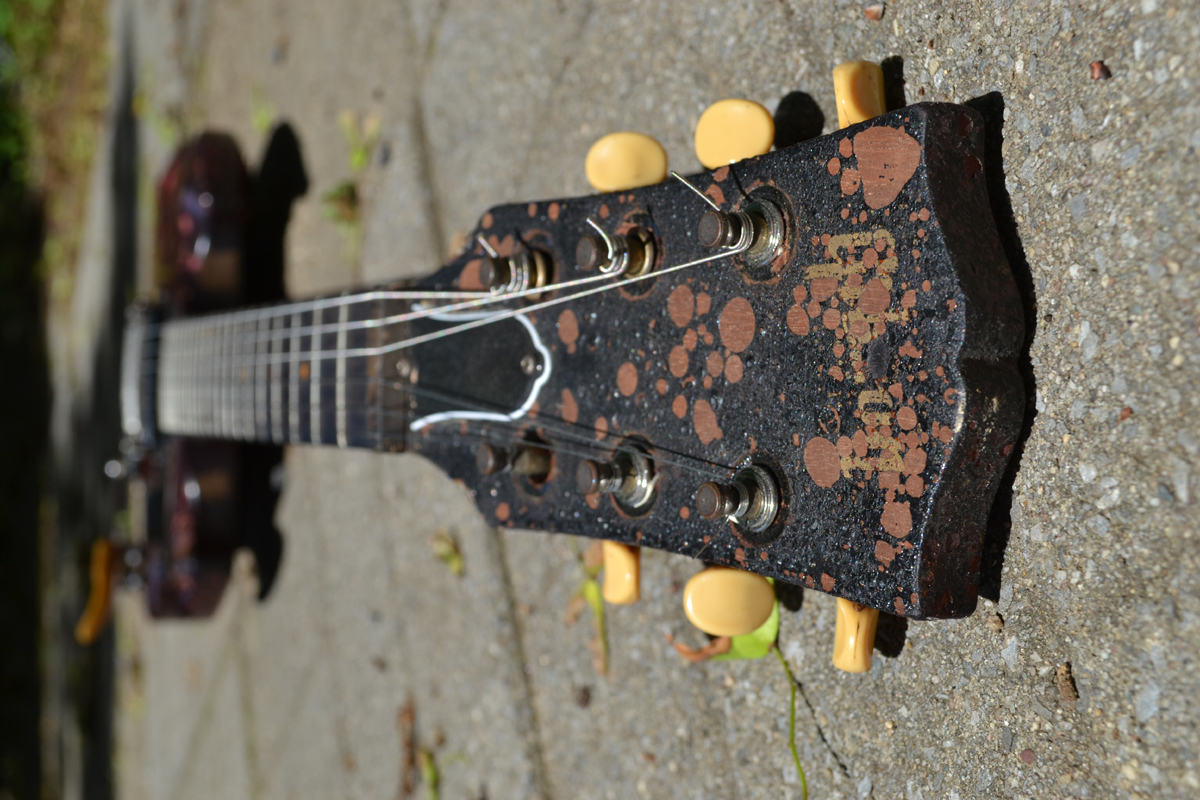 I spent that night thinking about having the guitar refinished. I even spoke to a luthier friend and sent him a photo, and he was very interested in refinishing the guitar. But I posted a few pics to a guitar forum (and one or two on Facebook), and the response from friends and strangers alike was unanimous – that I should leave it as is and show those scars proudly.

After sleeping on it for a night (and taking some sandpaper to the back of the neck to make it more playable and less bumpy), I decided that my fellow guitarists were right. The chips and bubbles are now part of this guitar’s story. Sure, it would probably look amazing with a well-done refinish, but then it would become one of those guitars that I’d end up getting all precious with. I saw myself with a lint-free cloth for a moment, wiping down the guitar, and I nearly slapped myself. A refinish might make it look great, but somehow it would be wrong. 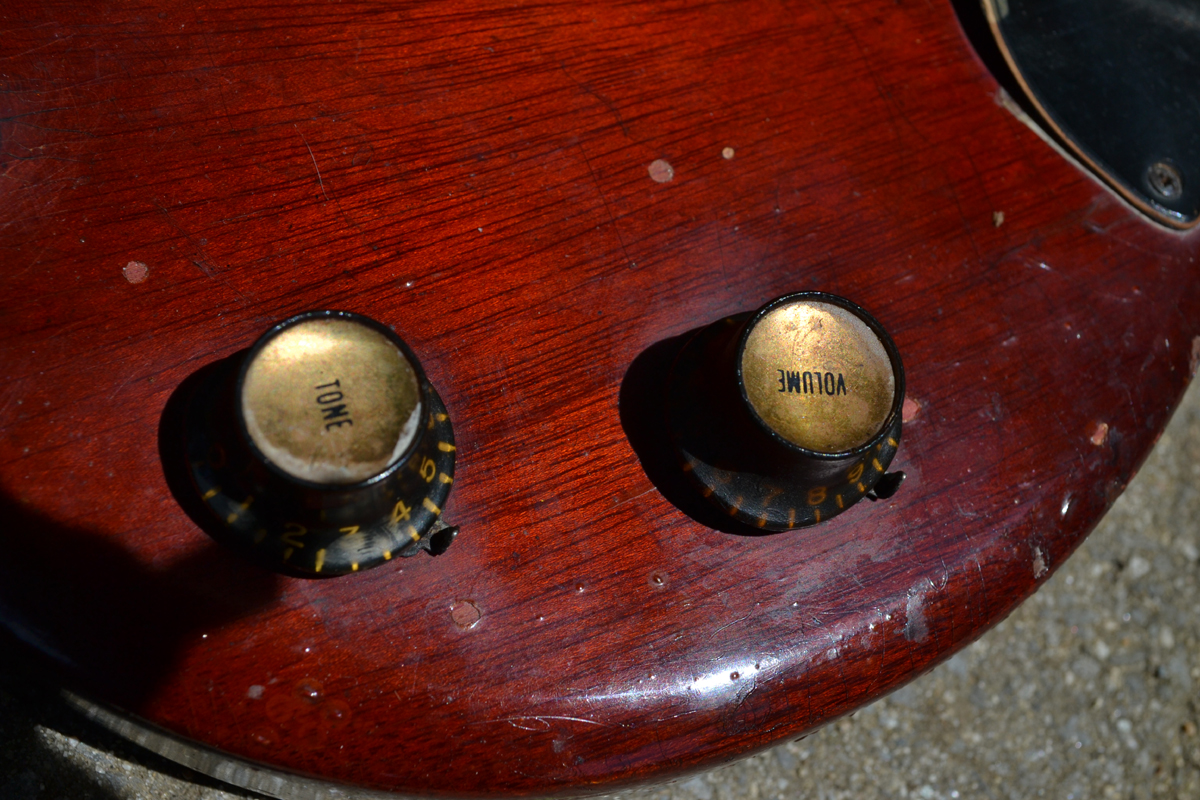 So, my new old ugly perfect guitar is going to rehearsal with me tonight, and will debut at my gig on Friday night. I’m guessing that a lot of people are going to be wondering why I’m playing such a ratted-out guitar, why I don’t have a shiny guitar over my shoulder. But the guitar players in the audience will understand perfectly. Where most people will see a chipped-up, discolored guitar that smells slightly of firewood, the guitarists will know that I’m playing the Real Deal. 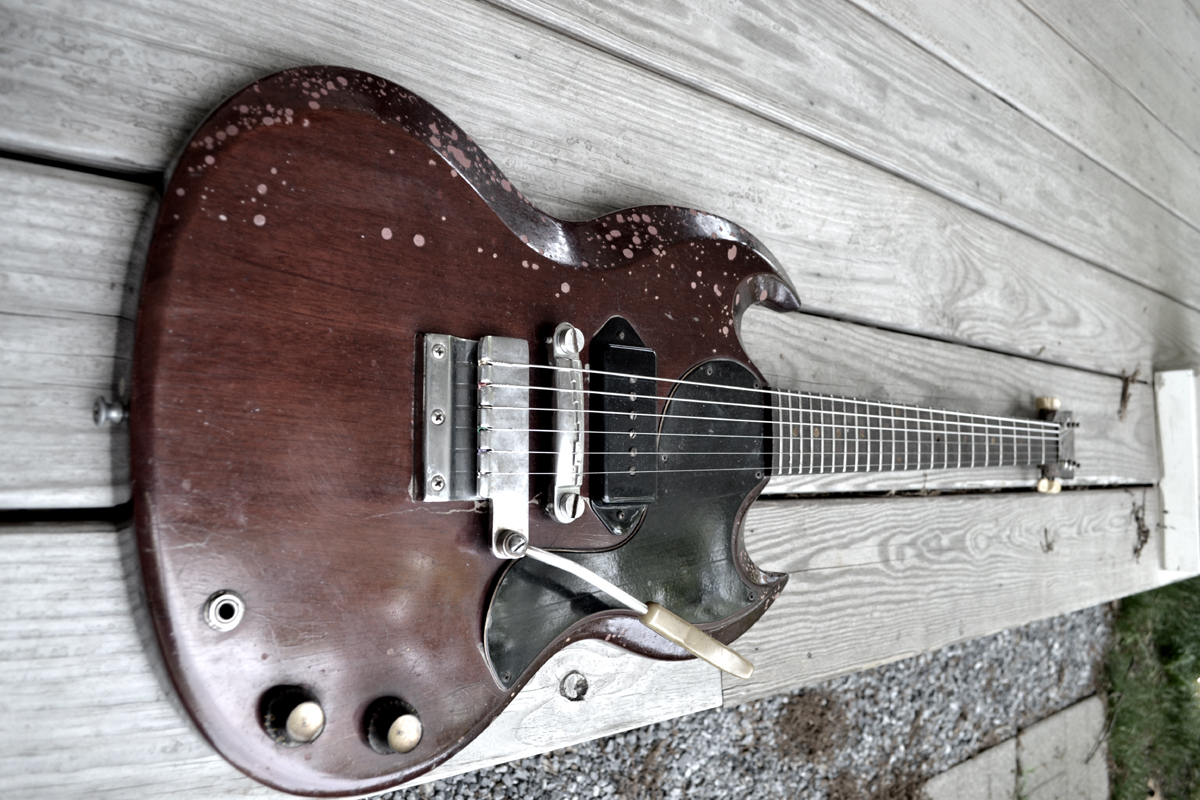