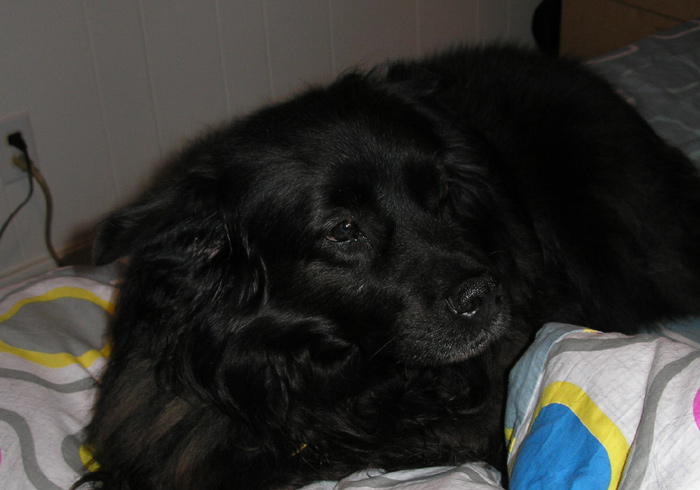 One day back in 2005, my wife and I made the decision that it would be nice to have a dog. We headed off to the Brookhaven Animal Shelter and went looking at all manner of dogs. As we walked through the dog pen area (twice, to get a good look at all of the dogs), there was one dog who stayed back in the back corner of his stall, except for when we walked by. Both times we went past his stall, the dog walked up to the door and licked my wife’s hand, then went back to his corner after we walked by. He was a kind of small black dog, and my wife took as much of a liking to him as he did to her. After talking about it, we filled out the necessary paperwork, and a couple of days later we went and brought him home. We named our small black dog Cody.

Cody was, simply put, an odd dog. He seemed to have little concept of the notion of play – the first time I threw a ball for him to fetch, he stood there, looked at the ball, looked at me. I tried for a while to get him into it, but he just never really got it, and I resigned myself to the fact that our dog just didn’t do fetch. I often wondered if his previous owners had abused him, because for a long time he seemed a little skittish around us, like he was afraid of doing the wrong thing. Over time he grew more comfortable around us, but I always had the thought that somewhere along the line a human had hurt him and we wanted to give him a home where he knew that all humans weren’t the type to hurt dogs. I think we did that.

The first night he was home with us, I took him outside to do his thing. I took my eye off him for a second, and he was off like a shot to explore his new neighborhood. It was cold that night, and there I was, walking up and down the street looking for a black dog at night. I was so mad, I went back inside and complained to my wife and said if he wanted to live here he’d find his way back. Five minutes later he showed up at our door, apparently satisfied with his roam around the neighborhood. I learned Rule Number One of Cody – if he saw an opening, he was going to take off on a walkabout. Even later on when his eyesight got bad and he didn’t move as well, he’d bolt given the chance (but he was a lot easier to catch up with then). We had and RFID chip installed on him with its accompanying yellow tag for his collar. One day he wandered off, and about a half hour later I got a call from a neighbor down the street. I walked over to their house and there was my dog, hanging out with the neighbor kids in their yard. I put his leash on and walked him home.

He could be a maddenlingly stubborn dog at times. If there was something he didn’t want to do, he’d plant his feet, dig in and not move. We learned this when we tried one day to give him a bath. He simply would not work with us. So we ended up taking him to our local animal hospital for grooming. The staff there loved him, and he took a particular liking to Crystal, the head groomer. He always liked jumping into the truck to go for a ride, and he was always happy to go and see Crystal, and she was always thrilled to see him.

Some comedian once said that people get pets, name them, and then never call them by that name again. We were no exception. Our dog’s name was Cody, but since he sometimes resembled a small grizzly bear we started calling him ‘Bear.’ As he got older, I started calling him Big Dude. As humans do, I thought the name fit him and that he actually liked his new persona as ‘Big Dude.’ So he became that, and even if he was lying in the hallway and I walked past, I’d call him Big Dude and he’d grunt in acknowledgement that yeah, he was Big Dude and everything was okay in Big Dude’s world.

The sad fact about owning any pet is that you get to watch them age and break down over the years. Cody was certainly no exception. His eyesight went, he developed arthritis, and he gradually gained weight just slowed down. On one of his trips to the vet, the doctor pointed out a lump on his left hip, which she said was a fatty tumor that most dogs develop as they grow older. Over the space of about two years, it grew larger, and about a week ago it burst.

A friend of ours recommended a doctor who made house calls, and we scheduled him to come by and take a look at Cody. He said that what we thought was a tumor was actually a cyst, but there was material under it that should be removed. We scheduled surgery for the following day, and the doctor packed him into his van and took him to the hospital. We spoke Tuesday, and he said Cody had come through surgery very well for a dog his age and that we could pick him up that evening. We went off to the hospital and brought him home.

Just like old people, old pets don’t react as well to invasive procedures and are slower to bounce back. Kelly and I sat up with him the entire night, trying to calm him and make him comfortable. For some reason, he needed to walk, and he walked in circles around our kitchen table until he couldn’t walk any more, then laid down. I spent most of the night on the kitchen floor with him, just petting him and talking to him. He seemed to be okay, but the following day he was pretty agitated again. And as much as he could, he continued walking around the table, as if trying to outpace his pain. Kelly and I spent another sleepless night by his side.

Yesterday morning he laid down on the blanket that we put out for him, and went to sleep. I was glad he was finally able to get some rest, but when I went to pet him he was unresponsive. After trying for some time to get him to stand up, I made a frantic phone call to the doctor, and told Kelly what was going on and she came home.

The doctor arrived and took a look at Cody. He said that he could have had a stroke, or maybe there was just some pre-existing thing going on in his brain that was triggered by the trauma of surgery. We were talking about the options we had, and had decided to send Cody back to the hospital to be put on fluids to see if we could bring him around. That was when Cody’s body moved for one last time. I instinctively called his name, and his body relaxed and he was gone.

People get used to sounds in the house, and they become part of the character of life. While I worked in my office in the daytime, I’d hear Cody coming before I’d see him – the tap of doggie claws let me know he was up and around. When we’d be watching TV in our basement in the evening, we could hear the tapping when he’d wake up and walk around to steal the remnants of food in the cats’ dishes. Late at night, that sound became my cue to take him out into the yard, and guide him around in the dark once his eyesight started failing him. Often, he really didn’t have to really do anything, but just kind of meandered around the yard in the dark. We’d call those his ‘old man walks,’ and even if it was cold or raining I’d let him wander around until he was done and we’d head back inside.

But the sounds. Last night Kelly and I sat in the basement in the quiet, and we waited for the tapping of claws on the floor above which weren’t there. Such a small thing, which makes such a huge difference in our lives right now. How I’d love to hear that sound one more time, to take Cody out into the yard for an Old Man Walk, to just pat him on the head and let him know that he was such a big part of our family and our lives. I’d like to think he knew that. As it is and always has been, we feel the hurt of not being able to do those things, to hear those sounds, just one more time. That’s the pain we feel, the regret we carry, when something we love is suddenly gone.

Bye, Big Dude. Good boy. We’re sure gonna miss you. The world is smaller today without the Big Dude in it.