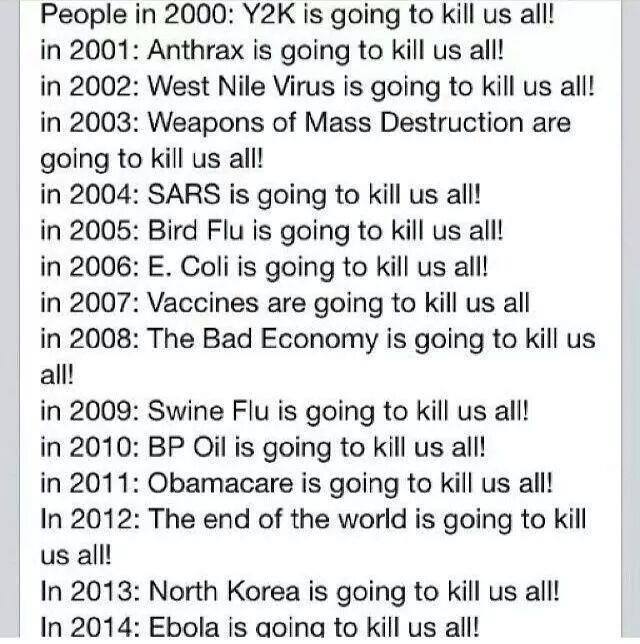 That simple word is the latest source of all men’s fears. Before that, ISIL. And the list above traces the Things That Were Going To Kill Us All, all the way back to Year One of the Great Fear, 2001.

Since 2001 and the attacks on the World Trade Center, people in this country have been afraid of, well, just about everything. But the Ebola scare has raised the bar on irrational fear. I scan my Facebook feed daily and read all kinds of iterations of that fear – what if a patient sneezes on someone? What if he takes the subway and uses a handrail? What if the virus mutates and becomes airborne?? Every day a new fear, each one scaling new heights of irrationality and silliness. Demands to seal the borders, block all flights from Africa, speculation that terrorists may infect themselves with Ebola and run through Times Square tongue-kissing tourists – it goes on and on. Here are a few simple steps to reducing the Big Fear…

Step One: Turn off the damn TV.

The cable networks, seeing an opportunity for ratings spikes and the increased ad revenues that come with them, have ratcheted up the fear as high as they can. In the process, they demonstrate the ‘skim factor’ – they lead with a scary headline, usually in the form of a question, that sets the tone. Of course, the question mark absolves them of any responsibility for stoking panic, because they can weasel out by saying they’re ‘just asking questions.’ And even if they have experts on who calmly explain just how difficult it is to contract Ebola, their scary headlines have already done the damage because people often just look at their scary graphics with the sound off (in airports, rest stops and bus stations) and assume the absolute worst.

Over the weekend, New York and New Jersey announced mandatory quarantine for any health workers coming into those states. Andrew Cuomo (Democrat, NY) and Chris Christie (Republican, NJ) succumbed to the general level of panic in their states and introduced hasty, half-baked, and unnecessary quarantine rules. A health worker who flew into Newark was taken into custody, put into a paper hospital gown and housed in an unheated tent in a parking lot without food or water. She did have her cell phone, however, and after she sent out pictures of where she was being held and talked to a few news agencies about how she was being treated, she was released this morning. And both Cuomo and Christie rescinded the quarantine order (hilariously, Christie insisted that he didn’t change his position on quarantine to the media – a hell of a needle to thread for a guy who might be running for president next year. Right wingers applauded his ‘leadership’ when he announced the quarantine order – because he was ‘standing up to Obama, why else? – but they’ve fallen pretty silent today). My gut feeling is that both governors met with their legal staffs and were told in no uncertain terms that the quarantines were illegal, most likely unconstitutional, and would result in massive lawsuits that would cost their states a lot of money. So the quarantines have been lifted as quickly as they were set in place.

With any crisis that comes along, people with agendas are going to cynically attempt to damage their political enemies for ‘ignoring’ the crisis – or even worse. In the past week, I’ve seen numerous charges that President Obama was intentionally letting Ebola patients into this country in order to ‘grab power.’ Hello??? The man is president of the The Lone Superpower on Earth already. How much more power could he possibly grab here?

A rhetorical question. Obama haters see this as a way for Obama to ‘help the terrorists’ or ‘impose martial law and declare himself president for life’ or ‘ship Conservatives (or Christians, which is kinda redundant) off to FEMA camps.’ There is no shortage of asinine conspiracy theories on the web, and apparently no shortage of rubes who will believe them. A lot of people who I considered to be at least reasonably intelligent have show up among the rubes in the past few weeks, glumly speculating that the Government is plotting to kill them, because twisted freaks like Glenn Beck or Alex Jones or a host of loony-ass religious leaders told them so.

The latest target of the Right, as of this morning, seems to be the Centers for Disease Control. Right-wing bloggers are going all-out in an effort to demonize the only organization on the planet that stands between the US populace and an outbreak of disease. Science? Nope, don’t trust it. These people spend all day ridiculing doctors with years of training, armed with reams of statistics and history of disease because they ‘work for the government. Meanwhile, Fox News got an expert opinion on Ebola Friday morning from Gene Simmons.

Yeah, the bass player from KISS, Gene Simmons. Somehow, people on the right have abandoned hope in modern medicine and are getting their opinions on communicable diseases from an old dude with bad hair and a long tongue. True story.

All of this leads me to believe that post 9/11, people in this country have come to desperately need something to be afraid of. Their lives are empty without an Existential Threat. Ebola, ISIS, North Korea, Obamacare, you name it, they’re pissing their pants over it. And I’ll be damned if I can see a way that the need for fear can or will ever be dialed back.

The only action left to take is to mock the people who buy this snake oil, relentlessly. They don’t listen to reason, I’ve tried that and given up. The only thing I can do is laugh my rueful laugh and let them rage about things that make no sense and carry even less probability of actually happening.

This country is in a pretty weird place right now. The National Id needs a brisk slap across the face and an exhortation to snap out of it, like Cher did in ‘Lovestruck.’ And I’m not even sure that’ll help.