So, among the many other things I haven’t shared this year by not posting, I actually stopped smoking cigarettes after 50 years of giving money to Philip Morris. I passed 10 months without a smoke a couple of weeks ago. But the subject of this post started taking shape back in October.

October 11, specifically, the day I celebrated being smoke-free for 8 months. I was talking to my wife about it, and she said something along the lines of ‘Think of all the money you’re not spending! You should take that money and buy an awesome guitar.’ So after doing some quick math (11 bucks a pack, 3 to 4 packs a week for 8 months), we got to a number that I could spend for a guitar. I spent a couple of days looking at guitars in the top end of the price range, and while there were quite a few killer guitars I could have picked up, I couldn’t bring myself to spend over 2 grand for a guitar. I’ve been pretty much the King of Cheap Guitars all my life, and I mentioned to my wife that I was uncomfortable spending so much on a guitar. My wife, being the wise person that she is, said ‘So spend what you’re comfortable with.’ So I cut the budget in half and kept looking. And out of nowhere, I found this. 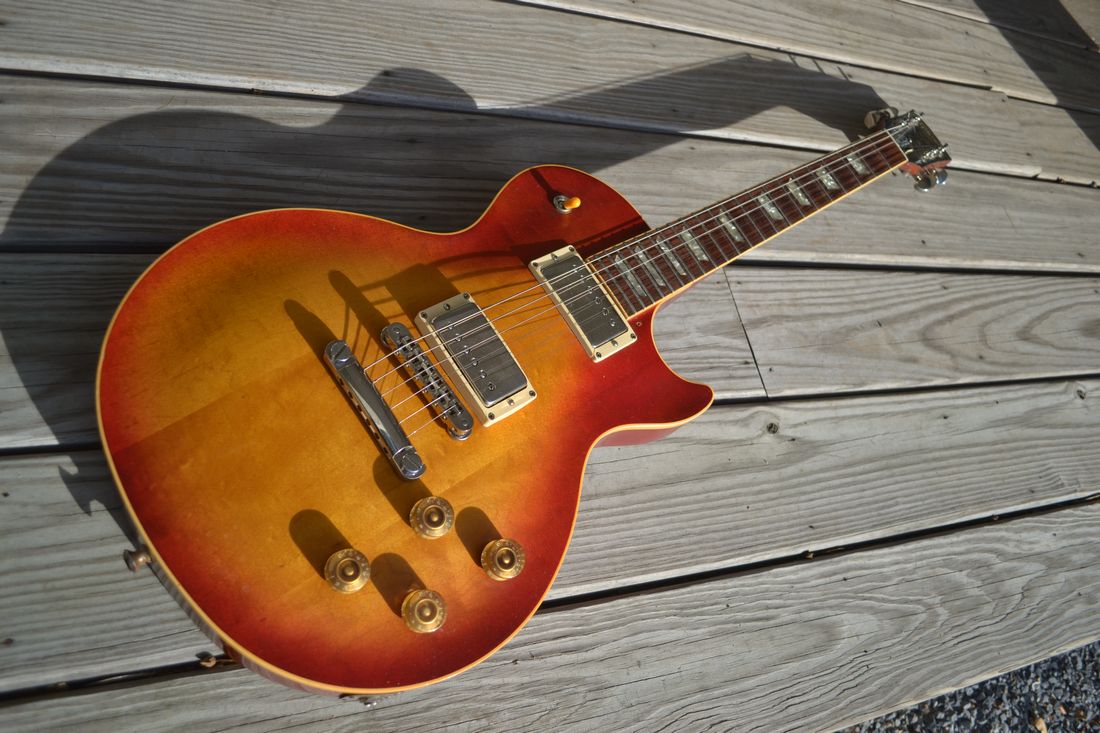 It’s a Gibson Les Paul Standard, 1982 vintage, which was sitting with a seller in Dallas, Texas. It looked to be in pretty good condition for its age (and I was looking for a guitar that wasn’t a ‘case queen,’ but one with honest wear that I could play hard and not worry about banging it up too much). And not only was it priced over a grand less than my budget, it was priced at least nearly two grand less than the going rate for every other ’82 Lester I could find online. After asking the seller a couple of questions, I was convinced. I threw down the credit card and waited for it to show up on my doorstep. 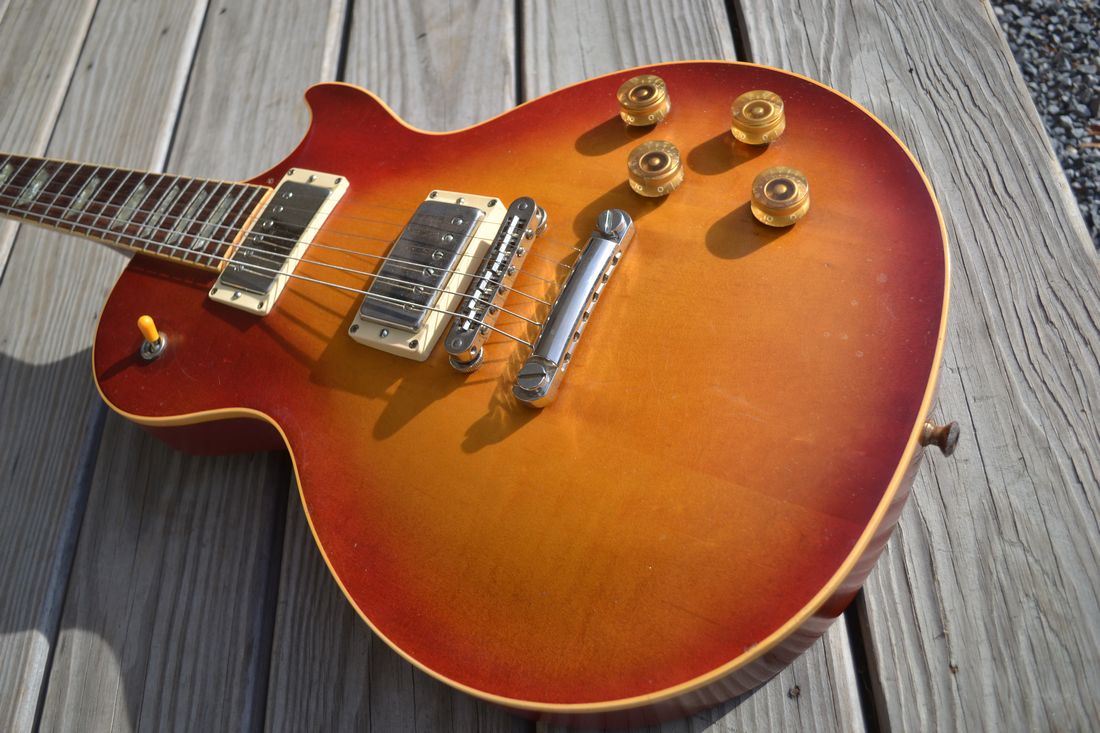 When it got to my house, I opened the (totally roached and original) hardshell case and was totally not disappointed. It has that lovely patina that only comes with age. Its original color was Cherry Burst, but years in the Texas sun had taken the edge off the yellow and red tones, muting the overall color scheme. And besides a couple of nicks and dings here and there, it was in really good condition. I took it out of the case and started playing.

Les Pauls are notoriously heavy, but this one was really comfortably light (about 9.5 pounds). Extremely comfortable to play, with the ‘Sixties’ neck profile which is slimmer than the chunkier Fifties profile. Frets, good. Binding, nicely discolored from aged lacquer. The only thing left to do was plug it in and see how it sounded. 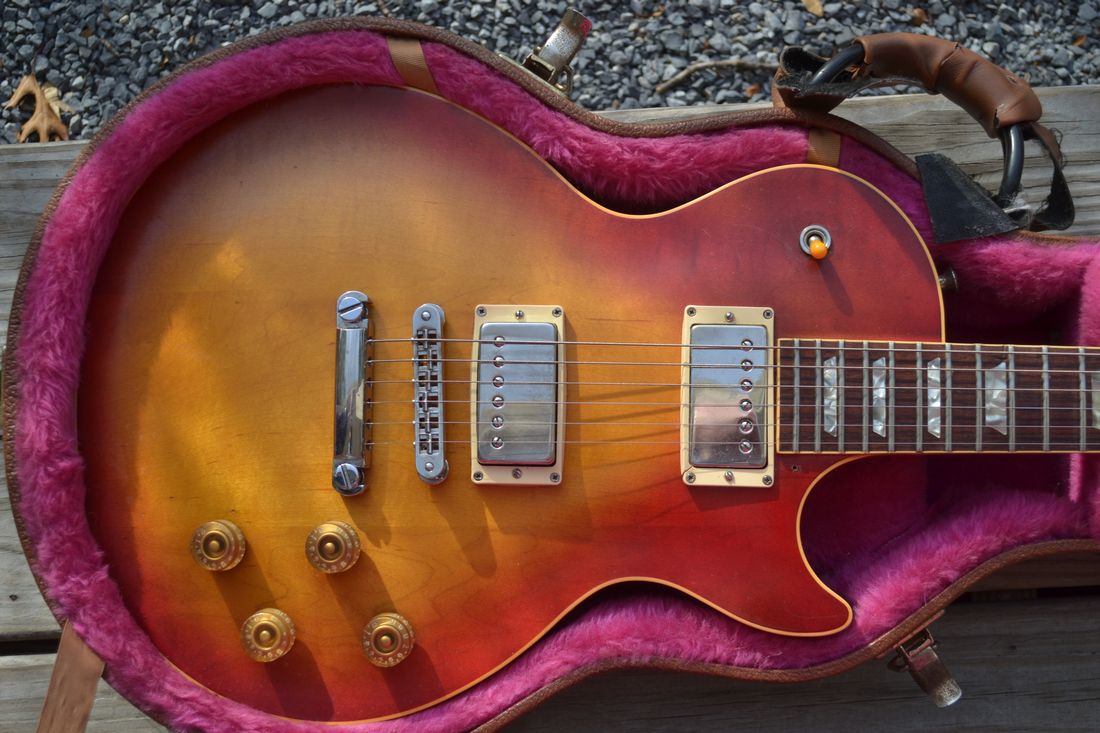 So I did. Worth. Every. Penny.

The tone. Beautiful articulation of notes and chords, even at high gain. Great balance. Ridiculously comfortable on my shoulder. I wold have been happy paying my full budget for this guitar. Hell, I would have been satisfied if I even paid the going rate for it. A friend who knows a lot about Les Pauls (the owner of a legendary ’59 Burst) told me to be careful, that 80s Lesters were extremely inconsistent. But I got lucky on every count. This one’s a winner, and outside of a trip to Mississippi (when I didn’t take it for fear of the airline mistreating it), I’ve used it for every note I’ve played since I got it. This one’s a winner.

People always told me that quitting smoking had its benefits But nobody ever told me they’d be like this.